At present we're only accepting a limited number of users. You can apply for an invite by signing up

GRADING With no restrictions

on the design, format of the page that supports all languages and all questions types with faster, efficient and accurate results with the facility of automated grading for multiple choice questions

Information about you and how it is used:

We maintain a database of only the information you provide us with at the time of the creation of your account. We only use this information to help us serve you better. Your trust is important to us, which is why we don't share information we receive about you with others unless we have:

Given you notice, such as by telling you about it in this policy, Removed your name or any other personally identifying information from it. When you contact Eduleaf, we may keep a record of your communication to help solve any issues you might be facing. We may use your email address to inform you about our services, such as letting you know about upcoming changes or improvements

Eduleaf assures its users that it takes precautions to safeguard your personal information against loss, theft, and misuse, as well as against unauthorized access, disclosure, alteration, and destruction.

Accessing and updating your personal information

Where we can provide information access and correction, we will do so for free. We aim to maintain our services in a manner that protects information from accidental or malicious destruction.

Use of information related to examinations:

We at Eduleaf assure you that there will be no breach of the privacy regarding the examinations that you upload on to our server; we may however use the statistics to better analyze our services, and hence produce a better product for your use. We assure you that in the case that we do need to access your information we will only do so with your prior consent.

We do our best to keep your information secure, but we need your help, report any bugs or other complaints to [email protected]

If we make changes to this Data Use Policy we will notify you, if the changes are material, we will provide you additional, prominent notice as appropriate under the circumstances. 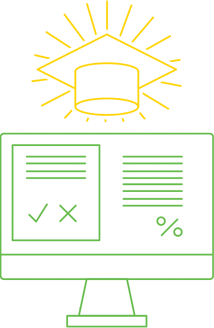 If you have to face a judge, try for first thing in the morning or right after lunch. A new study suggests that's when they're most lenient.

A paper published in 2011 show the results of the events that unfolded when a professor and his colleagues followed eight judges for ten months as they ruled on over 1,000 applications made by prisoners to parole boards. The plaintiffs were asking either to be allowed out on parole or to have the conditions of their incarceration changed. The team found that, at the start of the day, the judges granted around two-thirds of the applications before them. As the hours passed, that number fell sharply, eventually reaching zero. But clemency returned after each of two daily breaks, during which the judges retired for food. The approval rate shot back up to near its original value, before falling again as the day wore on. The researchers further found that the rulings didn't tend to be affected by the severity of the crime, the prison time served or the prisoner's gender or ethnicity.

When people are making a large number of decisions in a row, they look for ways to simplify the process when they get mentally tired, and the easiest decision to make is in favor of maintaining the status quo. It is a commonly known fact that decision making is mentally taxing and that, if forced to keep deciding things, people get tired and start looking for easy answers.

The researchers said they suspect people would also seek ways to simplify matters when facing a series of decisions in legislative, medical, financial and other situations. Other fields too are familiar with human imperfectability, and take steps to ameliorate it. Pilots, for instance, are given checklists to follow, partly in order to combat the effects of fatigue. Lorry drivers in the European Union are not allowed to drive for more than four and a half hours without taking a break.

Eduleaf is trying to take similar steps to help simplify the process of grading for instructors all over the world, thereby making the process more easy and error and bias free. By breaking down the process of grading into marking individual questions of all students as a group we ensure that the instructor follows roughly the same thought process while grading the entire question. This addresses the complaints by many students that their peers who had been graded either at the start of the process or at the end could be seen to either have extremely high or low scores. Moreover, instructors often claim that they are less likely to favorably grade a student who tends to “ramble” in his answers. By asking for short answers that fit within a limited area, Eduleaf dramatically cuts down the irrelevant text that a student tends to fill his answer with. This further helps the instructor grade impartially since he now has to compare only a short answer to his marking scheme. By making the questions as objective as possible Eduleaf also assures that there is less room for error on the grader's behalf due to any extraneous reasons such as exhaustion, prior mood, etc.

We strongly suggest that any teacher who loves teaching but hates the process of grading give Eduleaf a try! We assure you that you will never go back to grading long essay questions by hand again.

WITH EDULEAF GRADE YOUR
PAPER BASED EXAMS ONLINE

Eduleaf gives management complete power over the grading process, even which teacher marks which question, with its real-time teacher performance and reporting features.

Upload them on the server

Define regions, draw which question is coming where

Add collaboration to the exam

Customize reports according to your needs

Send out reports to students and management

Archived and stored in the cloud for future reference

Teaching is the world's best job, if it wasn't for grading!